Jonathan Scott and Drew Scott, who star in HGTV's “The Property Brothers,” will give RootsTech 2017 attendees unique insights into the role their family has had in their lives. The 6' 5" identical twin brothers will be the Thursday keynote speakers at RootsTech on February 9, 2017, in Salt Lake City, Utah. The popular brothers share passions for film and entertainment and for renovating older homes into dream homes. They have combined those passions to form an entertainment empire which became Scott Brothers Entertainment—an independent production company. 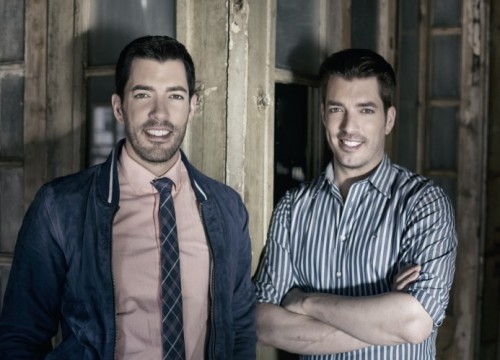 Their journey in entertainment includes much more than home improvement shows. Jonathan began performing in live theater and in TV and film as a child. He became a successful illusionist winning many awards and even performed live in Las Vegas. Drew was a high school basketball star and began acting in theater, improve, and sketch comedy in his teens. He even performed as a clown until he tired of the costumes and face paint.

The pair developed a passion for real estate as teens, purchasing their first fixer-upper house when they were 17. They did some renovations, and sold it a year later for a $50,000 profit to help support them as actors for a time before they decided to go back to college.

The Scott brothers were born in Vancouver, Canada. Their parents didn’t know they were going to have twins until the doctor saw Drew shortly after Jonathan was born. Because they lived on a ranch, Drew and Jonathan embraced the value of work at a young age—starting their first business at age seven. Their parents supported their various endeavors and encouraged them to pursue their dreams. “Our dad told us, ‘Don’t ever let anyone tell you that you can’t do something. Think of five ways you can do it, and then do it,’” Drew said, and that advice has become their mantra.

Both Drew and Jonathan are licensed real estate agents, but for their show, Drew is shown as the real estate agent and Jonathan as the contractor. Together they built their dream home in Las Vegas which has been featured on their series. The Scotts are involved in various philanthropic initiatives in North America and around the world.

At RootsTech, the brothers will talk about their unique family ties, and the can-do attitudes it fostered, their positive outlooks, and childhoods, their careers, their shared passions for buying and renovating property, and for the entertainment industry.