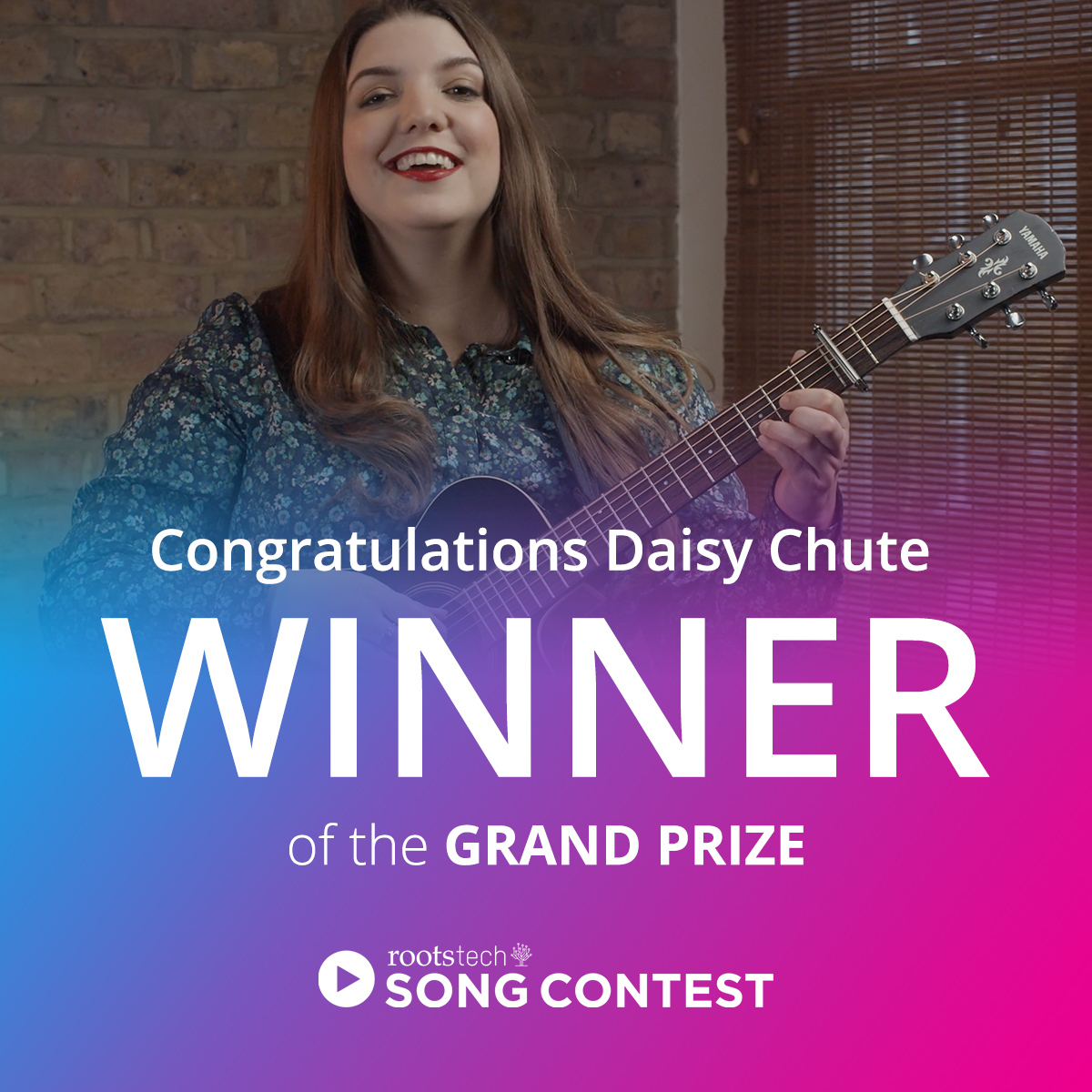 RootsTech and Kawai pianos announced the winners of “Connect,” the RootsTech Connect 2021 Global Song Contest. Winners were announced on the final day of the virtual conference, 27 February 2021. Fifteen hundred songwriters from diverse cultures, backgrounds, and experiences throughout the world submitted original music compositions in all genres and in their native languages. Winners were chosen from the top 12 finalists by a panel of industry experts and celebrity judges, including Drew Brown and Brian Willett, members of the band OneRepublic. RootsTech attendees chose the People’s Choice award recipient. Listen to the 12 finalists.

The grand prize went to British artist Daisy Chute for her song “Music Is There.” Chute was rewarded with a Kawai MP11SE stage piano and Kawai headphones. Chute’s song is a tribute to music as a universal language that brings people together, helps them hear, and lifts them. Music “brings people together, and it consoles you when you are down and lifts you even higher when you are feeling really good,” she said. The music was written during the first pandemic lockdown in the United Kingdom, where Chute is based.

The winners of the Professional, Youth, Amateur, and People’s Choice categories will receive other Kawai piano models.

The People’s Choice award went to Nathália Freitas for her song “Conectar.” “Music is something special in my family. It is something that really connects us,” she said. She wrote the song with her family’s unity in mind. She says the music is very special to her and pays tribute to her family’s ties.

Zuriel Rubio, was the winner of the Professional Division with “Connect,” a reminder that “together we can conquer every day.” After losing a son to brain cancer, Rubio found solace among the people of his ministerial congregation who pulled together to lift and comfort one another. His music recognizes that social support is essential. “Now we are going through this [the COVID-19 pandemic] as humanity. There is no better way than together [for us to] get through this,” he said.

The winner of the Youth Division was Daniella Vega, who submitted “Live Our Long Ago.” “We are all under quarantine now. I was feeling sadness,” she commented. As a teenager in her second year of high school, Vega was upset that she was missing out on so much. “I wanted to make the most of these years—my teenage years—because when I am older and look back on these years, I want to be happy about it,” she said. She wrote the song as a salute to memories from long ago.

Matt Kirby took top honors in the Amateur Division with “Winding Road” a reminder that we are not alone on the winding roads of our lives. “We all go through the years—the same seasons in life—but one thing that really doesn’t change is that there will always be someone there for us and we can always be there for somebody,” Kirby said.

The other finalists were the following:

Cruz Wilson— “Getting By”

Sabrina Barreto— “I Hope you Know What You Meant to Me”

Kawai is a three-generation family-operated global company that began as Kawai Musical Instrument Research Laboratory in 1927 in Hamamatsu, Japan. Kawai has earned a reputation for outstanding quality, workmanship, and innovation in the crafting of world-class instruments. Kawai acoustic and digital pianos are a top choice of pianists, teachers, churches, students, and professional musicians around the globe. The skillful blending of traditional piano craftsmanship with state-of-the-art technology has made Kawai one of the most award-winning companies in the entire music products industry—having received over 50 major international awards for excellence.

Comments (0)
Thank you for your message.