"The story of Roots traces a family's journey from Africa to America and back. At RootsTech, I'll share some of my own journey of family, storytelling and the influence of African culture on my American Experience."

FamilySearch International is pleased to announce that LeVar Burton will be the Friday keynote speaker at RootsTech 2017 on February 10, 2017. Burton is known by millions for his legendary starring role as Kunta Kinte in 1977 in the globally acclaimed and award-winning ABC mini series, Roots, as chief engineer Geordi La Forge in the iconic Star Trek: The Next Generation television series, and as host and executive producer of the beloved PBS children’s series, Reading Rainbow. Burton was also the co-executive producer of the re-envisioned production of Roots that aired in June of this year on the A&E Networks. 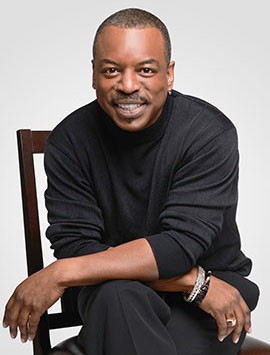 Reading Rainbow was one of the longest running children’s television shows in TV history (1983-2009) and one of the most acclaimed, earning more than 200 awards including 26 Emmys and a Peabody. "There's a whole new generation of kids that need to develop a relationship with the written word, especially, I believe, in this ultra-technological age. I'm in this for the mission. This is what I do," said Burton.

He is excited about the opportunity to keynote at RootsTech where he plans to share personal stories about Roots, Star Trek, his Reading Rainbow foundation, and also stories of his mom and her commanding influence on him.

"The story of Roots traces a family's journey from Africa to America and back. At RootsTech, I'll share some of my own journey of family, storytelling and the influence of African culture on my American Experience."

Burton’s acting career began as a college student at the University of Southern California with his first-ever audition—winning the role of Kunta Kinte in ABC’s wildly popular 1977 TV mini-series, Roots. Thus, at age 19, he found his picture on the cover of Time magazine. Soaring to stardom was only the beginning for Burton. He followed it with many roles—most notably in Reading Rainbow and Star Trek: The Next Generation.

An advocate for children’s literacy, Burton’s Reading Rainbow provides an outlet for innovative uses of storytelling. Reading Rainbow uses technology and media to inspire today’s children to love reading, and is currently the number one educational app on iTunes. The digital service includes more than 500 children’s fiction and non-fiction books, and 200 newly-produced video field trips with new content added weekly.

RootsTech is held at the Salt Palace in Salt Lake City and will be simulcasted around the world with many sessions recorded for later viewing. RootsTech offers a line-up of world-class speakers, thrilling entertainment and engaging classes and activities with a bigger-than-ever expo hall. There will be something for everyone regardless of age or experience. Registration for RootsTech is currently open at reduced rates at RootsTech.org. Rootstech 2017 is sponsored by FamilySearch, Ancestry.com, FindMyPast.com and MyHeritage.com.

Comments 1 - 1 (1)
Thank you for your message. It will be posted after approval.
Teressa White Harrison
Where is this great event going to be and how much? Thank you
Paul Nauta
Teressa,

RootsTech happens every year, usually the first week of February in Salt Lake City, Utah at the Salt Palace Convention Center. Go to RootsTech.org for registration and costs details. There are different pricing structures based on your interests. Thank you.