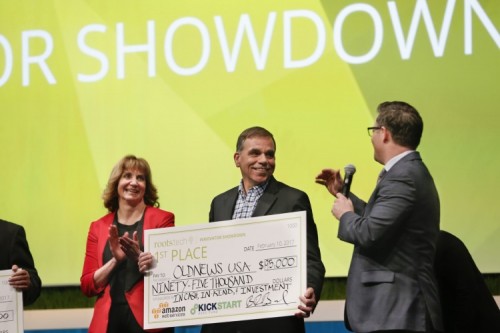 Old news, it seems, is actually “new” news. Very innovative news in fact. Today at RootsTech, the world’s largest family history technology conference, OldNews USA took top honors in the 2017 Innovator Showdown, walking away with $95,000 in cash and in-kind prizes. OldNews is an android app designed to help users quickly discover their family in historical US newspapers. The app uses the Library of Congress “Chronicling America” collection of more than 11 million newspaper pages from 1789 to 1922 to deliver its results.

In front of a crowd of close to 14,000 live and online viewers, the six RootsTech Innovator Showdown finalists battled for $199,000 in cash and prizes and bragging rights in the rapidly-growing, multi-billion dollar family history industry. An experienced amateur genealogist, Bill Nelson of Auburn, Massachusetts, designed the program as a solution to tedious, difficult online newspaper searches. The OldNews USA app was designed to simplify and streamline the search process.

Using keywords, users can look for newspaper accounts of a person or topic with the option to look at articles of historical events. In a person search, you type names and dates into your mobile device and choose a location on Google Maps which produces a list of newspapers in the targeted geographic area for a time period. It brings up images of the actual newspapers with the name or event you are seeking highlighted so you can quickly locate it on the page. Images can be enlarged for easier access to detail.

Nelson is a software developer by trade. “I was new to android and needed something to practice on. I had felt the pain points of newspaper research and thought ‘this would be a good project,’” he said. Initially he developed the app for his own use, then realizing it could help other researchers, he expanded it into a mobile app.

OldNews is compatible with Android devices, but Nelson is working to create an app for IOS devices and computers. With his winnings, he can now get business and technological assistance to accelerate development. While OldNews USA is designed to search US newspapers, he hopes to adapted the app for other countries.

The 5 finalists were whittled down from more than 40 applicants from around the world. Each took three minutes to convince the panel of five judges and live audience that their product was deserving of a chunk of the $190,000 in cash and prizes.

After each presentation, there was a four-minute question and answer period between each contestant and the judges. The judges then selected the top three winners, and the viewing audience selected the People’s Choice Award winner.

With $190,000 in cash and in-kind prizes and services from sponsors at stake—an increase of nearly $100,000 from the original projection—the pressure, tension, and energy of the event was tremendous.

Emberall was the other finalist. It provides a method to capture and store pictures and videos creating an accessible archive.

The Innovator Showdown, now in its third year, was designed to foster innovation in the family history industry.

Comments 1 - 2 (2)
Thank you for your message. It will be posted after approval.
Fancis C. Harwood.,ESQ.
My royal descent of 40 generation's certified by the collage of Arms London, England.
Gail Dever
Re the line, "The 5 finalists were whittled down from more than 40 applicants from the US and Europe," note that third-place winner Louis Kessler is from Winnipeg, Manitoba in Canada, not the US or Europe.
Paul Nauta
I think you will find this was corrected immediately in the online version. Refresh your browser. Thanks for the heads up.