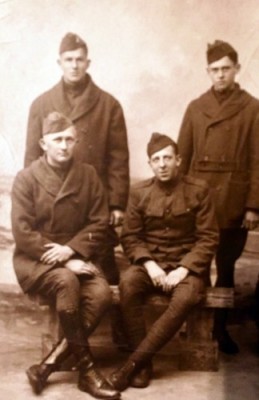 A century ago, the United States joined its allies to fight in World War I—the “Great War” or the “War to End All Wars.” When the U.S. joined the war effort, battles had already raged in Europe for nearly three years between the Allies and the Central Powers.

Almost five million American military personnel marched to war under the command of General John Pershing, commander-in-chief of the American Expeditionary Force. More than 116,000 Americans died in the war—about half from the Spanish Flu pandemic that swept the globe in 1918, killing millions around the world. Nearly 30,000 American military died of the flu before they even got to France.

The country followed the news of the war, with many people supporting the war effort in industry, farming, and other ways as they waited anxiously for the return of their loved ones. On November 11, 1918, about a year and a half after the United States entered the war, Germany formally surrendered, and terms of peace were negotiated. The nation rejoiced as soldiers returned home to rejoin their families and normal lives. But their experiences helped shape their lives, their posterity, and the country.

As the country remembers that war, many families seek to document the stories of their ancestors and friends who participated in the conflict. The veterans of that conflict are gone now, but many Americans are still alive who listened to the stories told by their parents, grandparents, and great-grandparents of their families’ experience during World War I. Some have documents and old letters, but not everyone has such personalized memorabilia. They may find documents in FamilySearch’s searchable online collections to provide insights.

To find details about an ancestor's military service, start with the Family History Research Wiki, which directs readers to related documents. Type World War I into the search box in the wiki. The results provide historical context to events during the war, suggestions of records that may provide World War I information, and links to records on other websites. 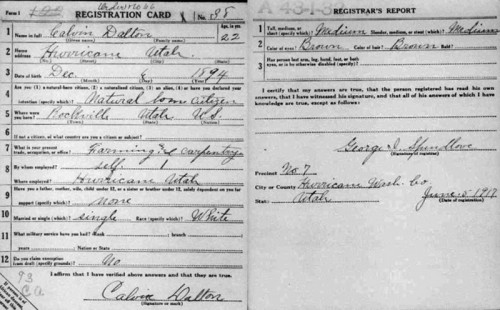 The most extensive collection on FamilySearch.org is the United States World War I Draft Registration Card collection, with nearly 25 million records. During the course of the war, the amount and kind of information required on draft cards changed, but draft registration cards typically included at least the registrant’s full name, home address, birth date, birthplace, marital status, occupation, physical description, and more.

In addition, many states have registration indexes and card collections that may include other information. For example, searchable state service-card collections on FamilySearch.org for North Carolina, Maine, Louisiana, and Texas provide information about service records, injuries, periods of service, place of birth, age at service or date of birth, units served with, and more for hundreds of thousands of military personnel.

FamilySearch.org has also published searchable images of World War I Enemy Alien Registration Affidavits from San Francisco, California. This collection of records has nearly 34,000 records that offer invaluable genealogical information about noncitizen families during the war, including birth location, countries of citizenship, children, siblings, extended family, educational level, date of arrival in the United States, occupation, languages spoken, a description and a photo of the registrant, and more.

The United States Index to Naturalizations in World War I Soldiers, 1918 offers both indexed information about citizens naturalized during the war and links to images of the actual records.

Census records provide further clues about military service. The 1920 census did not ask questions specific to military service, but the 1930 and 1940 censuses did. Searchable images of the census sheets are online at FamilySearch.org.

One less-known collection containing information about the World War I military comes in records from the Young Men’s Christian Association (YMCA). This volunteer organization provided programs and supplies to support the troops, the sick and wounded, and prisoners of war. Family Search.org has 27,000 images from the YMCA World War I Service Cards, 1917–1919 collection that provide names, addresses, work, religious affiliation, and army service information.

The following World War I books can be found in FamilySearch's digital book collection online.

FamilySearch International is the largest genealogy organization in the world. FamilySearch is a nonprofit, volunteer-driven organization sponsored by The Church of Jesus Christ of Latter-day Saints. Millions of people use FamilySearch records, resources, and services to learn more about their family history. To help in this great pursuit, FamilySearch and its predecessors have been actively gathering, preserving, and sharing genealogical records worldwide for over 100 years. Patrons may access FamilySearch services and resources free online at FamilySearch.org or through over 4,991 family history centers in 129 countries, including the main Family History Library in Salt Lake City, Utah.

Comments (0)
Thank you for your message.