FamilySearch International, today published its graphical year-in-review and highlights some of its 2019 achievements—like its 125th anniversary as an organization and the 20th anniversary of popular free website, FamilySearch.org. Since its establishment in a small upstairs office in Salt Lake City, Utah, as the Genealogical Society of Utah in 1894, it has become the world’s largest genealogy organization, now known as FamilySearch International. Its ongoing dedication to helping individuals and families make fun discoveries and connections, plays a vital role in the growing consumer interest in and demand for family history-related services.

In 2019, FamilySearch added nearly one billion searchable records and images of free, historical documents online to the billions already available, added new local facilities around the world to assist in personal research, provided support to customer requests and offered millions of online record hints to users of FamilySearch.org. 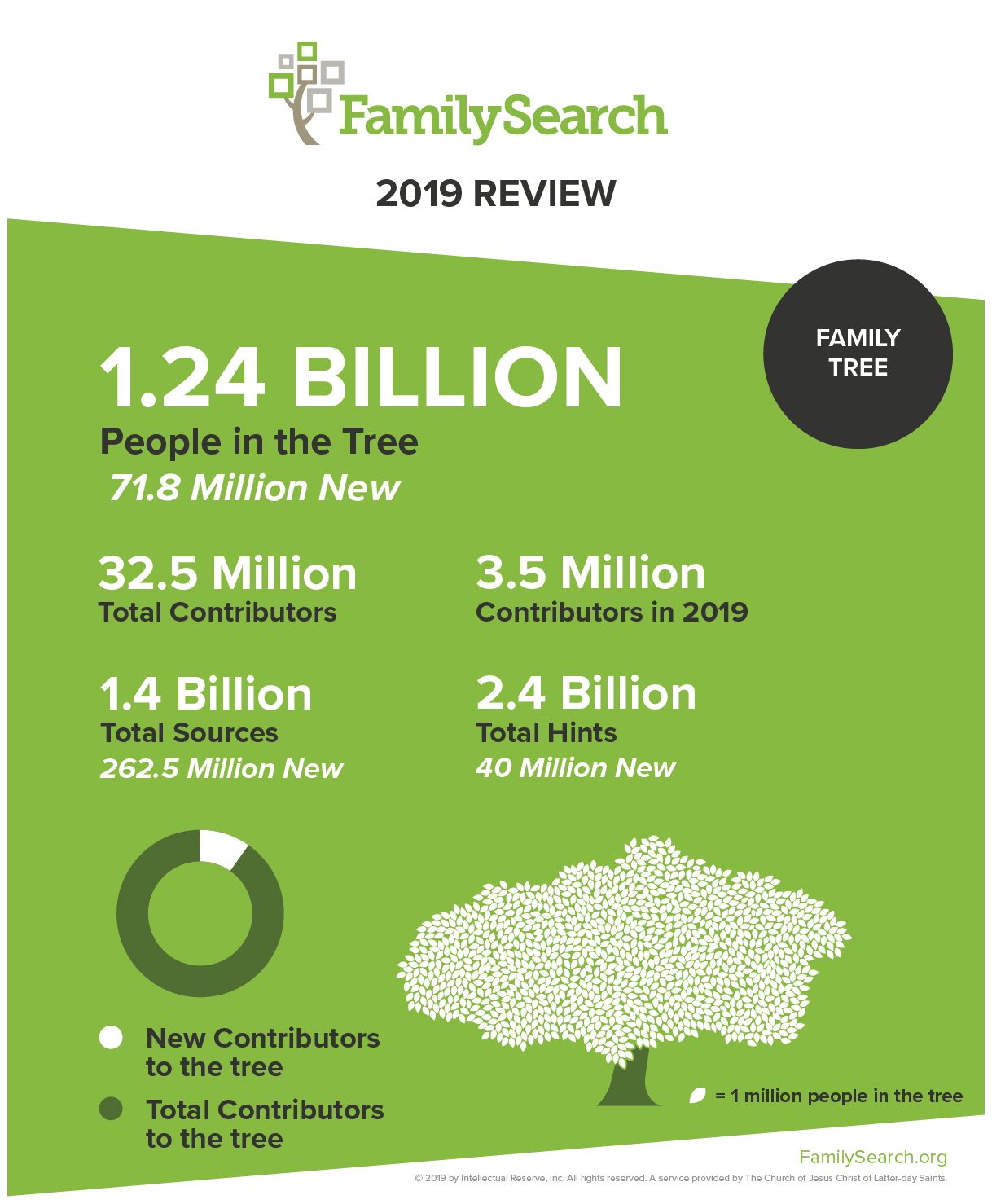 FamilySearch received 169.5 million website visitors and tallied 13.9 million registered users. The FamilySearch Family Tree expanded in 2019 as 3.5 million contributors added 72 million more people to the more than 1.2 billion people in the Family Tree. Sources added by users help confirm the family connections on the tree, and 262.5 million sources were added last year bringing the total to 1.4 billion. The numbers continue to grow as records become available and more people add their family histories to the free, community-based tree.

To help users locate sometimes-obscure records, FamilySearch has provided 2.4 billion search hints since the program began. In 2019, 40 million personalized hints were offered to help easily connect new sources to users’ ancestors in the tree, and the user process to evaluate and attach those sources has been simplified. 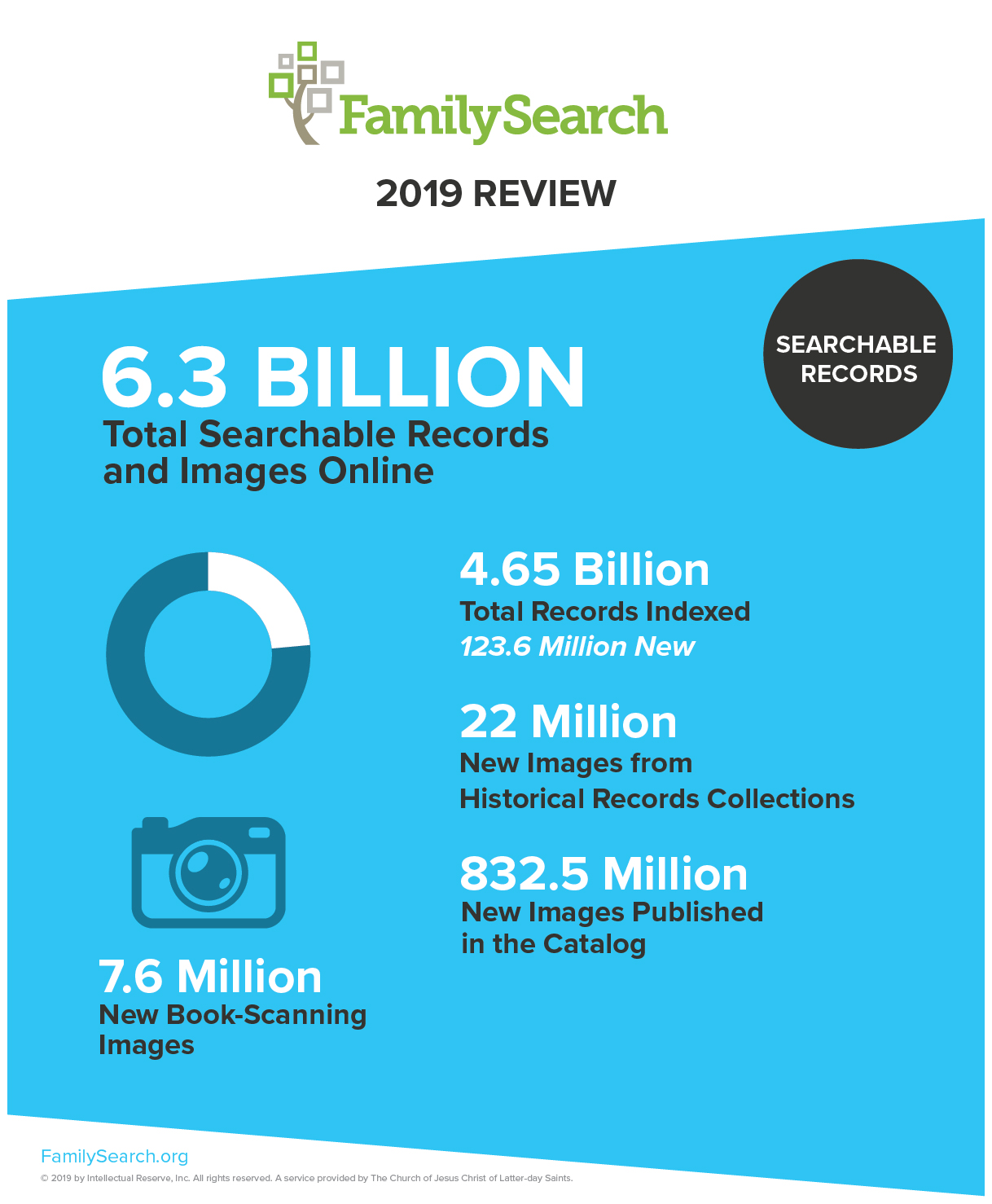 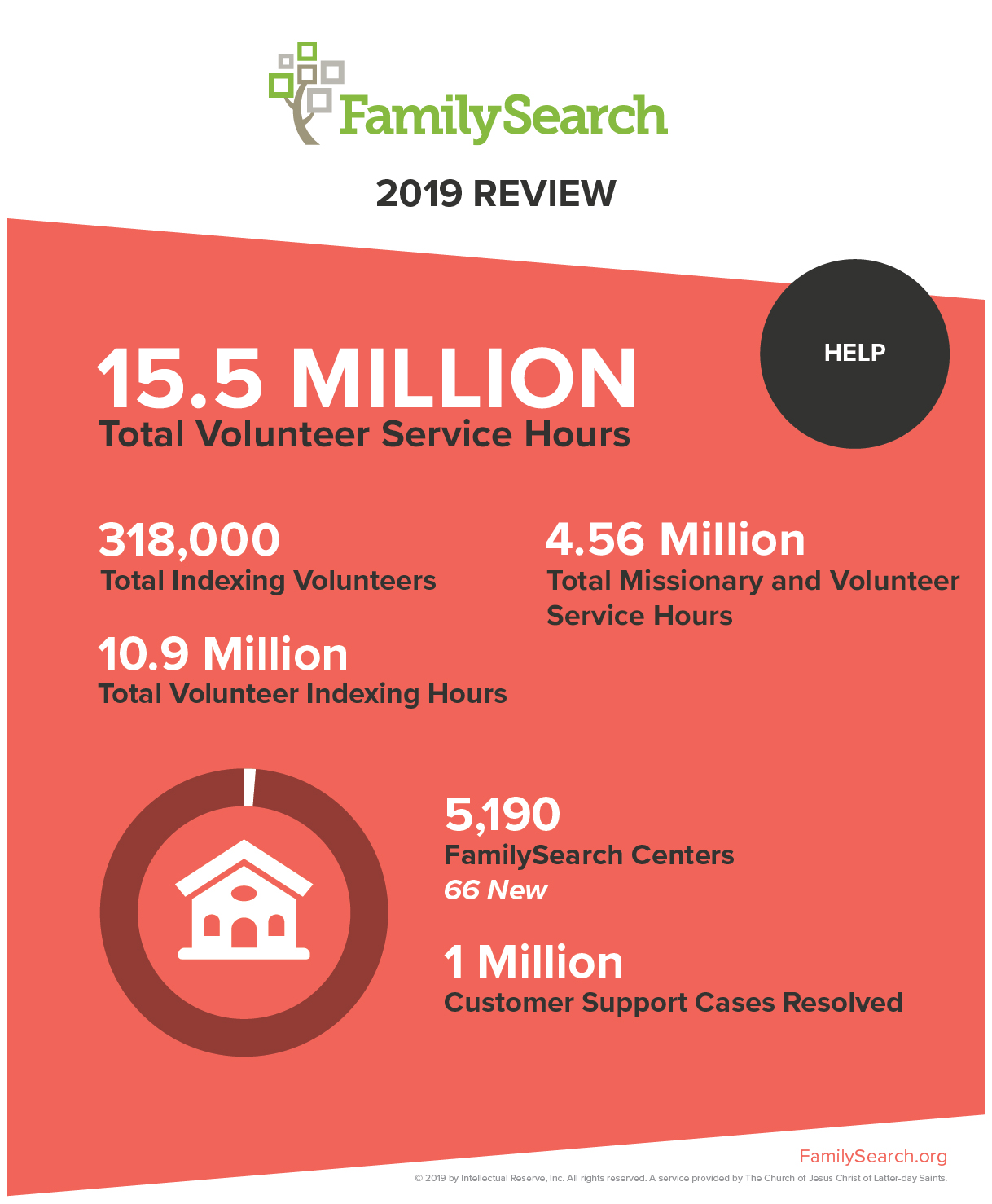 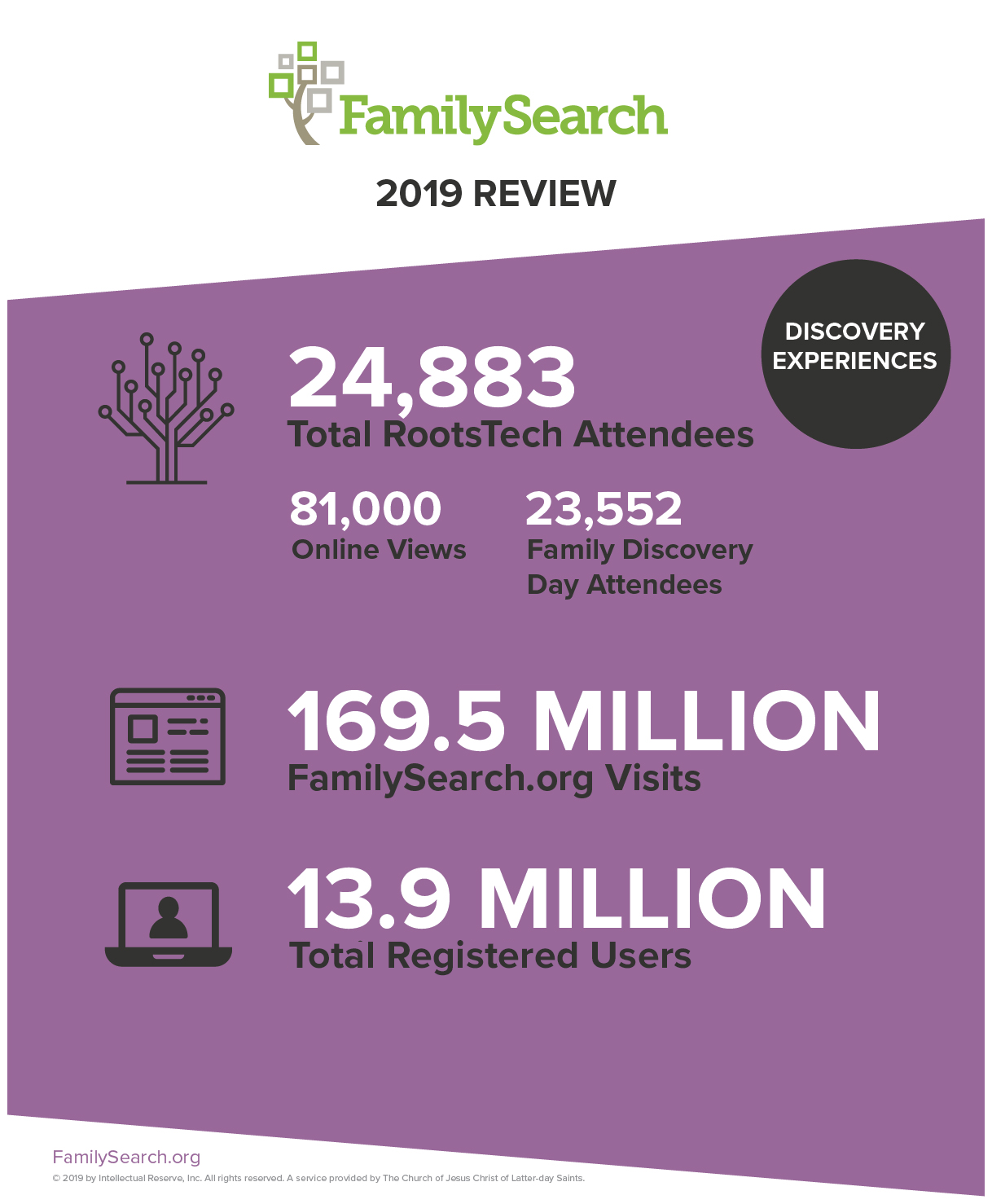 True to its mission to create fun personal and family discovery experiences and connections, FamilySearch hosted RootsTech 2019 in Salt Lake City. More than 15,000 in-person visitors attended this four-day event. For the first time in its history, the popular event held a convention outside the United States. This event was held in London, England (see RootsTech London) and saw 10,000 attendees. Combined the two events had 81,000 online views. Family Discovery Day, a special day-long event integrated into RootsTech, attracted 23,500 visitors. 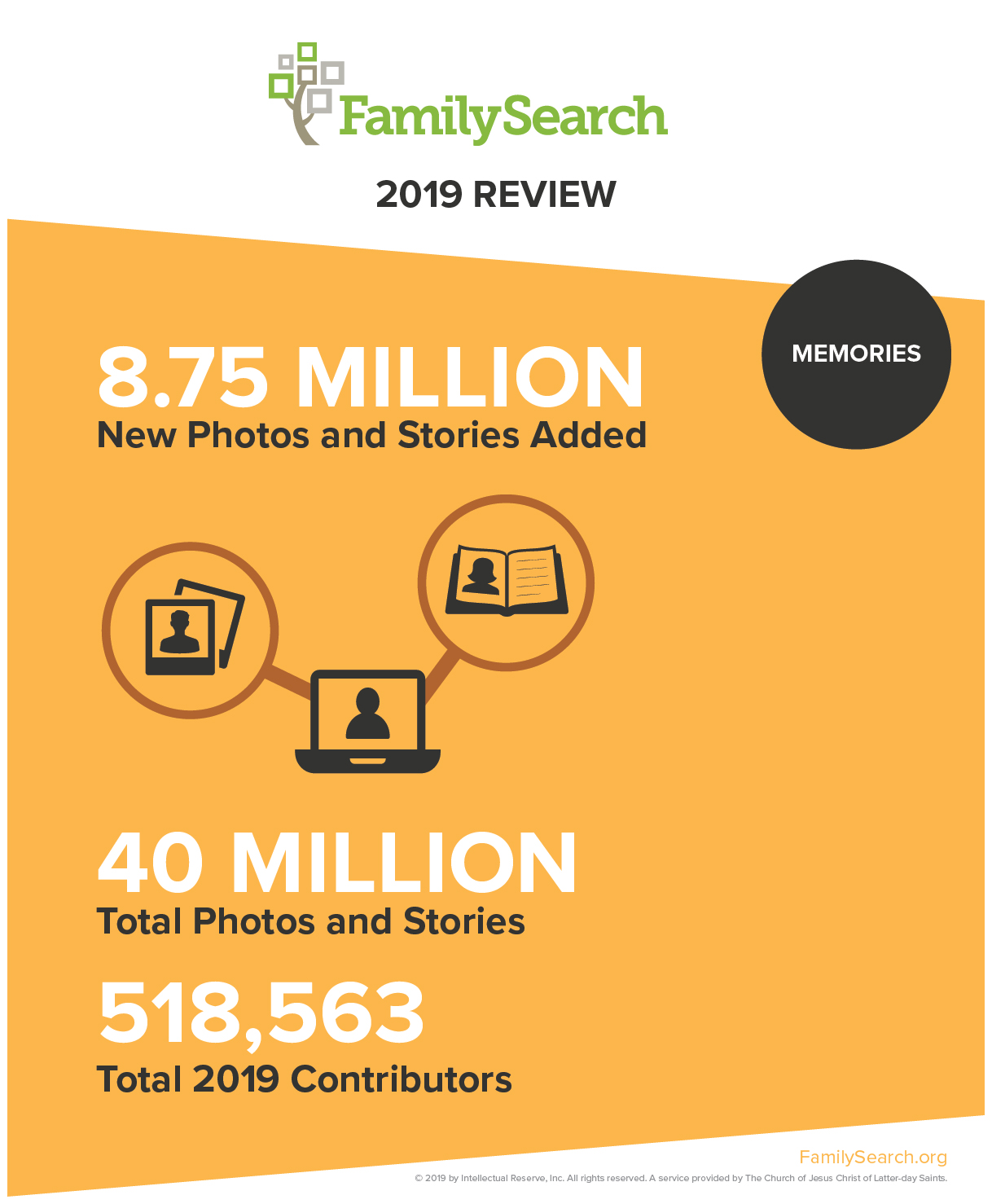 Family history is about more than just names, dates, and places—it is about the people those facts represent and their personal stories. Over half a million people added more than 8.75 million photos, stories, and recordings of their ancestors to the FamilySearch Family Tree this year using the FamilySearch Memories feature and mobile app. These new additions bring the total family memories preserved and shared to over 40 million.

In 2019, FamilySearch added a much-anticipated innovation that now enables users to make name corrections to its indexes. The ability to correct additional types of indexing errors besides names are coming in the near future.

A new Thank-a-Volunteer feature was added in 2019. It enables you to express gratitude to those FamilySearch volunteers who made it possible for you to make new ancestor discoveries through indexed, searchable records.

David Rencher, chief genealogical officer for FamilySearch and director of the Family History Library, received the Certificate of Appreciation from the American Society of Genealogists for extraordinary contributions to the discipline of genealogy at its annual meeting on November 2 in Salt Lake City, Utah. Rencher received the rarely awarded accolade “in recognition of his vigorous and visionary efforts to serve the aims of scholarly genealogy at the Family History Library and at FamilySearch.”

In 2019, the FamilySearch Research Wiki, a treasure-trove of genealogical expertise, advice, and insights, for family history enthusiasts, published its 90,000th article.

FamilySearch International is the largest genealogy organization in the world. It is a nonprofit, volunteer-driven organization sponsored by The Church of Jesus Christ of Latter-day Saints. FamilySearch and its predecessors have helped millions of people make fun, personal and family discoveries and connections for over 125 years. FamilySearch’s free services and resources can be accessed at FamilySearch.org or through more than 5,000 family history centers in 129 countries, including the Family History Library in Salt Lake City, Utah.

See and share FamilySearch's highlights from 2019 in a graphical overview and quick-read summaries. Find out how many free, new records were added in 2019 or how much did the Family Tree grow? New discovery experiences? How many volunteers made it all happen?