What do over a 100 million Americans have in common? Their ancestors immigrated through Ellis Island or one of the New York Harbor immigration stations that preceded it. FamilySearch and The Statue of Liberty-Ellis Island Foundation, Inc. announced today the entire collection of Ellis Island New York Passenger Arrival Lists from 1820 to 1957 are now available online on both websites giving the opportunity to the descendants of over 100 million arrivals to discover their ancestors quicker and free of charge.

Originally preserved on microfilm, 9.3 million images of historical New York passenger records spanning 130 years were digitized and indexed in a massive effort by 165,590 online FamilySearch volunteers. The result is a free searchable online database containing 63.7 million names, including immigrants, crew, and other passengers traveling to and from the United States through the nation’s largest port of entry.

“The Foundation is delighted to make these immigration records accessible to the public for free for the first time,” said Stephen A. Briganti, President and CEO of The Statue of Liberty-Ellis Island Foundation. “This completes the circle of our decades-long collaboration with the team from FamilySearch, which began with providing the public with unprecedented access to their genealogy and sparking a world-wide phenomenon linking past and present.”

The expanded collections can be searched at the Statue of Liberty-Ellis Island Foundation’s website or at FamilySearch in three collections, representing three distinct periods of migration history. 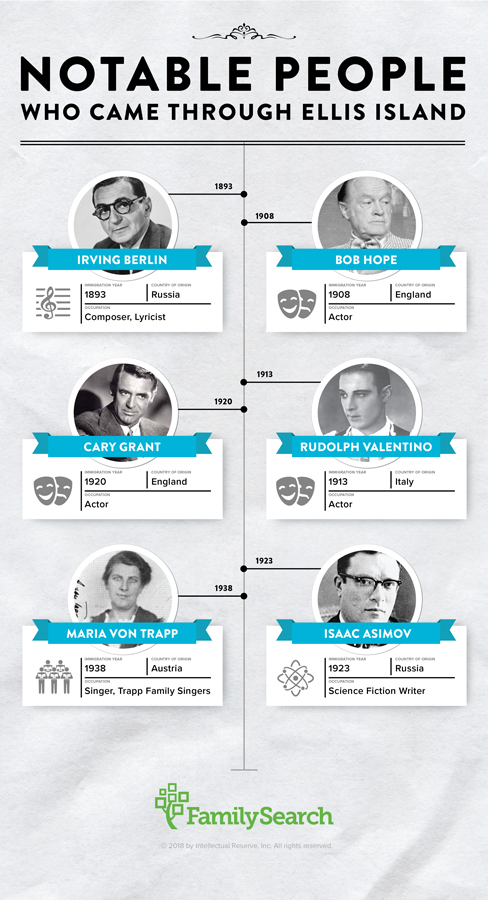 The ship manifests list passengers, their names, age, last place of residence, who is sponsoring them in America, the port of departure, and their date of arrival in New York Harbor and sometimes other interesting information, such as how much money they carried on them, number of bags, and where on the ship they resided during its sail from overseas.

For millions of Americans, the first chapter in the story of their lives in the New World was written on tiny Ellis Island located in upper New York Bay off the coast of Manhattan Island. An estimated 40 percent of Americans are descended from those who emigrated, primarily from European countries in the period from 1892 to 1954. Millions of them passed through Ellis Island’s immigration center in route to lives in “the land of the free”.

A lesser known fact is that what we know today as “Ellis Island” didn’t exist before 1892. Ellis Island’s predecessor—Castle Garden—was actually America’s first immigration center. Today it is known as Castle Clinton National Park, a 25-acre waterfront historical park located within The Battery, one of New York City’s oldest parks and the departure point for tourists visiting the Statue of Liberty and Ellis Island.

Create your free FamilySearch Family Tree, and preserve and share your immigrant ancestors' photos and stories.

About the Statue of Liberty-Ellis Island Foundation

The Statue of Liberty-Ellis Island Foundation is a non-profit organization founded in 1982 to raise funds for and oversee the historic restorations of the Statue of Liberty and Ellis Island, working in partnership with the National Park Service/U.S. Department of the Interior. In addition to restoring the monuments, the Foundation created museums on both islands, The American Immigrant Wall of Honor®, the American Family Immigration History Center®, and the Peopling of America Center® which transformed the museum into the Ellis Island National Museum of Immigration. Its newest project will be the new Statue of Liberty Museum. The Foundation’s endowment has funded over 200 projects at the islands.

Comments 1 - 20 (192)
Thank you for your message.
mili appell
papers of Anna Dieckmann via Ellis Island???
Cindy Nonnemacher
We are looking for information on Alice Mather , arrived in Ellis Island on 01/01/1847
John pail
Looking for john(johan) pail and gisela bauer
Kathy bennett
My great grandmother Anna volk 1891

Norman Mason
I am trying to find my wife's great grandparents
J T Burgess
I am looking for my paternal grand father Pietro Buffa BIRTH 19 NOV 1898 Carini, Palermo, Sicilia, Italy. From what I know he came through Elise Island or Castle Garden. Would have been prior to 1926.
Cheers
Lorretta Derr
I am trying to find my mother's record of coming through Ellis Island in 1928. Her name was Hildegard Gertrud Boettcher from Koenigsberg, East Prussia. She told me she come in 1928 before her 20th birthday. I thought she arrived at Ellis Island in the spring and then continued on to Ogden, Utah.
Sandie
I am looking for Immigration Records for ROBERT LAWSON and spouse JANE UNDERWOOD/TRIMBLE of Dalton,Dumfriesshire, Scotland. Entry into America 1825, 3rd child born in England 1824, 4th child born in KENT,NEW BRUNSWICK 1826.
Any help would be greatly appreciated.
JUDY G RANNEY
LOOKING FOR IMMIGRATION RECORDS OF MARTIN SCHOENFELDT
mary helen pangburn hrubetz
I am interested in finding anything about my family history. They lived near Northwood Iowa an Myrtle mn
Suzanne Clark
There are no records for my grandparent(Alexander Taylor and Albena Denham-Daveron). They immigrated from St.Kitts in 1900-1901. Great Aunt, Alice Denham, per her citizenship papers indicated she arrived on 11/15/01 on the SS Roraima. The ship does not exist on any records or does it show her exiting at Ellis Island. The family all lived in the Bronx, New York.
Clarke Wolfe
https://www.encyclopedia-titanica.org/community/threads/loss-of-the-ss-roraima-st-pierre-104th-anniversary.25447/ https://www.wrecksite.eu/wreck.aspx?155075 I can help further -just e mail me. I would be happy to help. Clarke Wolfe


Annette Mann
I am trying to locate any living relatives of my grandmother, Filomena Mascia Mignogna. She immigrated to the US in 1911 or 1912 with my grandfather, Guiseppi(Joe) Mignogna and 3 siblings, Salvatore(Sam), Bellangela(Angeline), and Michael.
She died in 1918. They lived in Salemville, PA and Hannastown, PA.
Peggy Karuza
looking for Leonard Roman birth 1867 in Orebro sweden. Emmigration records from sweden show leaving on 14 Feb 1887. Thats as far as i can research. His name does not come up anywhere. I know he got here and settled in Montana.Thank you for your help. Peggy
Stephen Cooper May 14 2020
Researching my Irish ancestry I have determined from Ellis Island passenger lists that James Boyle,age 32, his wife Annie (nee Moran), age 30, and son James Jr aged 9 months sailed to New York from Liverpool on SS Teutonic in Nov/Dec 1894. They all were born/lived in Co Mayo. The Teutonic docked in New York on 13 Nov and 12 Dec. They also had a daughter, Mary, who would have been about 2-3yrs at the time, and who I am sure arrived in USA at the same time, but I am not able to find her listed on the passenger lists. Can you help please?
Barbara Semans
Looking for record of immigration of Letitia or Lettie Judge (or Breheny)on a ship about 1888 or 1888.
István Szakál Sega
Where I can find?
Martta krook
Looking for record of ship grandmother was on in 1927, and sister ester saima krook.
Niurka Rod
Busco abuelo español nacido 1869-1870 natural de coruña españa hijo de antonio fuentes garcia y antonia guntin rico llamado Juan Fuentes Guntin vino a cuba a la guerra del 95 y fallecido aqui dejando descendencia favor ayudar en su busqueda
Thomas John hopfensperger
I believe my great grandfather came from Germany in 1847 but can’t find where. His name is johann and his spouse is johanna
benjamin steinman
Immigration 1900's

Find your US immigrant ancestors in the entire collection of free New York Ellis Island Records now online at FamilySearch! The records cover the years 1820 to 1957.
Newsroom