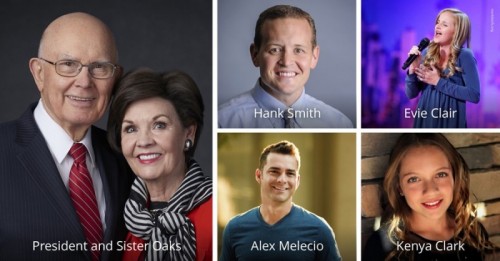 RootsTech 2018 Family Discovery Day is pleased to welcome President Dallin H. Oaks of the First Presidency of The Church of Jesus Christ of Latter-day Saints and his wife, Sister Kristen M. Oaks, as the keynote speakers at Family Discovery Day at 1:00 p.m. MST on Saturday, March 3, 2018. They will share insights from their family experience in family history work, the importance of individual families and family connections, the corresponding importance of temples and temple work, and insights into how each person can contribute to family history based on their circumstances. Family Discovery Day is a one-day, free event, but registration is required at RootsTech.org.

President Oaks is a strong proponent of family history work and redeeming the dead. He notes that family history work is more than gathering names and dates and encourages everyone to do something. He and Sister Oaks will share special insights into where families belong in the tapestry of human life and the weaving in of individual family heritage—past, present, and future.

Popular inspirational speaker and BYU professor Hank Smith has spoken to audiences in nearly every state in the U.S. Smith loves to teach youth and young adults from the scriptures, and he reminds listeners that life in a family has its challenges, but the rewards are eternal. He returns by popular demand from RootsTech 2017 Family Discovery Day.

He will be joined on stage by Jason Hewlett, a world-class performer, who uses comedy, music parody, and impressions to receive standing ovations from audiences worldwide. He began his career with Las Vegas Legends in Concert and has been a member, since 2003, of the National Speakers Association. He has appeared at more than 2,000 events and venues during the past 10 years and is one of the country’s premier corporate event headliners. He has performed in every major casino in Las Vegas, appeared on the nationally televised Jerry Lewis Telethon, and has won numerous Best of State Entertainment Awards in Utah. Together, these two will show youth how to make family history fun!

Evie Clair (13) a recent finalist in America’s Got Talent 2017, credits her father, one of her biggest supporters and her inspiration, for her determination and talents. She began onstage as Annie at the Hale Center Theater at age 8. She arranges music on the piano, released two pop singles before she was 12, sang her original song on a movie soundtrack, and is a popular YouTube performer. Evie’s father passed away a week before her final performance on America’s Got Talent. She sang her original song for the final show with celebrity James Arthur, who tweeted that it was his new favorite song.

Alex Melecio, originally from Sinaloa, Mexico, is an accomplished Latin singer who combines the masculinity of the classic Mexican Charro with the soft sweet poignancy of a pop balladeer. Melecio’s music is fresh and inventive, featuring an acoustic pop sound of his own. His music speaks of hope, courage in hard times, and the longing for home, blending tradition with invention. He has won the hearts of Hispanic audiences in concerts performed in homes to shows in front of 20,000 people. In 2012, his voice reached a national audience as a finalist on Tengo Talento, Mucho Talento, one of the most popular television shows among Hispanics in the U.S.

Kenya Clark, a member of One Voice Children’s Choir and a band singer with the Caleb Chapman's Sound House, has been a singer all her life. This year she toured Japan and France with the One Voice choir. Her Moana video cover won Best Music Video by the 2017 Utah Music Awards.

In addition to hearing guest speakers, guests can attend numerous free sessions specifically designed to help Latter-day Saints with callings and give them the latest tools and resources, one-on-one help, interactive activities, inspiring messages, and fun.

RootsTech Family Discovery Day is a one-day free event for LDS individuals and families to celebrate their heritage on March 3, 2018. Although RootsTech originates in Salt Lake City, Utah, interested parties around the world can join live online. Video streaming will be in English, Spanish, and Portuguese.

Admission is free, but event registration is required. Visit RootsTech.org/family-discovery-day to register.

If you can’t attend Family Discovery Day in person, you can still participate virtually! General sessions will be streamed live on the home page of LDS.org in English so that members of the Church around the world can participate.

If you can’t watch live on March 3 starting at 1:00 p.m. MST, videos of the messages from Family Discovery Day will be archived at lds.org/discoverfamily for later viewing.